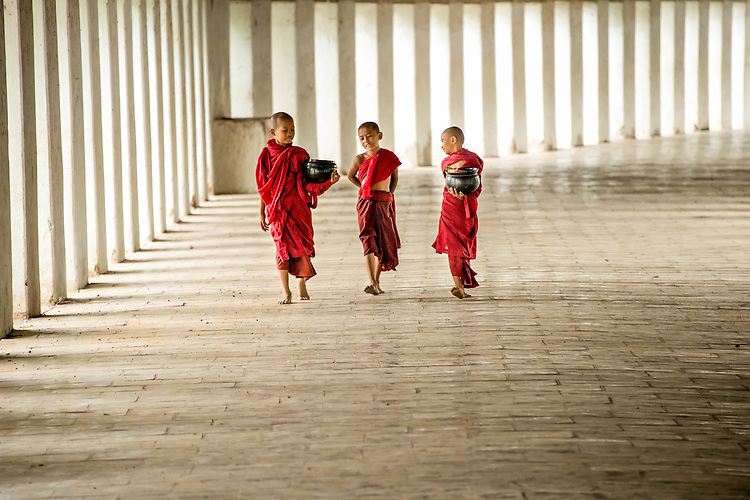 Myanmar is one of the most devout Buddhist countries in the world. About 89% of the people in Myanmar are Buddhist. People in Myanmar practice the Theravada Buddhism, which is more austere and ascetic, but also harder to practice than the Mahayana Buddhism, the other main branch of the Buddhismhe novices in Myanmar have quite an easy-going life. They only have to keep 10 precepts, a fully ordained monk has 227 precepts. Young novices are allowed to play football, watching TV, playing video games and having fun, which is great to see, because all in all they are just normal kids. On the other hand, the life of the monks can be very tough: sleeping in a dormitory, waking up very early, washing with cold water, studying a lot and always strict discipline.

Very often the young novices start their monastic life in a small village at the age of nine or ten. When they grow older they get the opportunity to go to a bigger city or religious center like Bagan, Mandalay/Sagaing or even Yangon. They have to make a decision: either they go to a big monastery with sometimes up to more than thousand other novices. Or they prefer the more quiet and meditative life in a small monastery. Novices have to learn a lot, and the learning doesn't stop for a fully ordained monk. First they have to learn Pali to gain access to the Buddhist scriptures. Pali is also frequently chanted in a ritual context. The other focus of the study is to learn the way of the Buddhism life. Sometimes, in case they attend a monastic school or a scripting center, they also get the opportunity to learn English, Mathematics and Physics. And the brightest of the young monks will probably attend the Buddhist university in Yangon to study Buddhism for many years.
©ingrid Songster
Myanmar, Mandalay